Happy Independence Day, y’all! Ever wonder how some of your favorites celebrate America’s birthday?

Well that’s the great thing about social media because now you can celebrate with them.

Here are how some of country’s biggest stars celebrated Independence Day!

Happy 4th of July from Edgar and I pic.twitter.com/AhPbPvOjHb

Houston, it was an Honor to be with you tonight! Happy July 4th everyone! #FREEDOMOVERTX pic.twitter.com/5g9gftZ30r 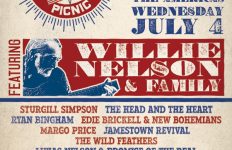